Back and sicklier than ever!


We have been away for two long weeks but now we are back! We are been away on our honeymoon to California which was amazing, so amazing we didn't actually have time for any games on our travels! (except Star Realms - there is always time for Star Realms).

You might think that didn't leave us a lot to talk about but fortunately we had had a couple of gaming sessions just before we left so we cast our minds back to two weeks ago and discussed those games instead. This episode we discuss  Arboretum, Bohnanza, Liars Dice and Paperback as well as a couple of IOS games. (This is a link to the poorly titled The Game app I was talking about)

As you might be able to tell from my voice I'm a little bit under the weather at the moment, so my energy levels didn't quite stretch to a pillow talk but we do go off on quite a few tangents this week such as my mothers favourite word games, the practicality of playing games on a plane and the terrifying prospect of all you games being stacked on top of each other and the potential crushing that could occur!

However if that wasn't enough BGIB for you can always follow us on social media - just use the links at the bottom of the page.

Also we are now a proud member of the Inside Voices network, so check out the website www.insidevoicesnetwork.com for more awesome podcasts!

20 comments:
Email ThisBlogThis!Share to TwitterShare to FacebookShare to Pinterest

It's easy to forget when you are heavily involved in the hobby that what you are doing is still fairly niche. Most people people think of the Beatles when they hear Ticket to Ride and a fortified french town when they think of Carcassonne. Board games to the masses are playing monopoly at Christmas or playing snakes and ladders as a kid.

This week we discuss in that perception will ever change, and if hobby games will ever break into the mainstream like video games have done and the factors that might be stopping that from happening now. As well as the things that are being done right now to tackle these issues, including the current indigogo campaign from Dized.

We also have our usual discussion of games we have played this week including Arctic Scavengers and Star Realms, and what it feels like to find you have been playing a rule wrong in a game after 30+ plays!

We also have a big announcement this week! We have joined the Inside Voices Network, a network of other board gaming podcast. We were so flattered to be asked to join, being fans of all three other shows in the network: Ding and Dent, the Five By and Greatway Games. All the shows are different from each other and different from a lot of the other podcasts out there. We recommend checking them out if you haven't already!

We are now going away for 2 weeks so the next full episode won't be until 24th September, in the mean time catch up with us on the social media platform of your choosing - just use the links at the bottom of the page, you will find us on Twitter, Facebook and Instagram or you can always email us at boardgamesinbed@gmail.com. We love receiving your emails! 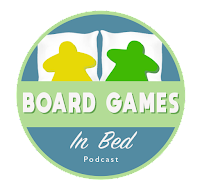